It’s not the first time it has happened. Twenty minutes in and we are all looking around at each other thinking, Why are we talking about this rabbit trail? Let’s start talking about the book for Pete’s sake. One of the opening issues was, Was Robert Massie, author of Peter the Great, offering a sympathetic history? Was he trying to shield Peter from too harsh judgment by contemporary readers? It was a good question. But like 14 hungry wildebeests salivating over a magnificent thirty-point stag, we plunged in ravenously and after twenty minutes were still scrabbling for the rack.

Once things got going, there was universal agreement that, whether Peter’s harsh reforms, justice, warfare and taxation were pardonable or not, Robert Massie’s book was a spectacularly interesting read, and nobody complained about the 850 pages. Rather, most of us found it hard to put the book down. Stunning descriptions of life in the 17th and 18th centuries, suspenseful battle sequences and jaw-dropping accounts of Peter’s sheer, balls-to-the-wall, kick-assery were told with a novelists skill. No wonder the book won the Pulitzer.

Memorable events from Randy’s essay (accessible from the sidebar) include the Revolt of the Streltzy, incognito travels in Europe, Holland and the shipyards, Gordon, LeFort and the Jolly Company, Menshikov, Catherine the peasant girl that became Peter’s mistress, th

en wife, then successor, the construction of St. Petersburg, Charles XII, the Sultan’s harems and eunuchs, and the trial and death of Peter’s son Alexis.

Add to that the shocking accounts of the brutality of the 17th century, torture and executions, the state of women’s lives in Russia when Peter was born, the unfathomable cold, misery and hunger suffered especially by Charles’ armies in 1708, and you have something close to an epic. And we all appreciated Massie’s detours when necessary, to explain the back story on some nation or geography or cultural artifact.

As someone pointed out, our world would be very different if not for Tsar Peter’s influence on Russia, Europe and ultimately the world.

The excitement did not end with the book discussion. There were perhaps more books proposed than ever before, and with a large group of people voting there was a three-way tie. A tie-breaker vote yielded a two-way tie. And a final tie-breaker of 6 votes to 7 left us with Orson Scott Card’s Ender’s Game as the book for July.

The book for June is The War of the End of the World, by Llosa.

Note: there are a couple of pics of Russian locations in the menus on the left. 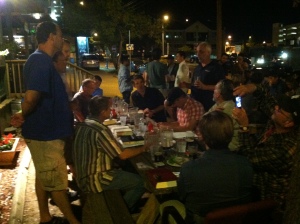