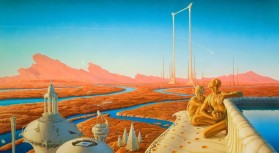 The Martian Chronicles, by Ray Bradbury.

It is perhaps a testimony to the enduring nature of Ray Bradbury’s books that the first question we grappled with at the meeting for this book was What genre is it? “Science fiction” just doesn’t seem to fit very comfortably.

Although much (most) science fiction tells stories that reach well beyond the first level of the narrative into matters of contemporary political, social, or technological significance, The Martian Chronicles seems less about the science or the fiction than ordinary SciFi. The setting of most of the action (Mars) was not essential to the story. It was simply a location of sufficient distance and isolation from the current events on Earth to allow particular

psychologies to develop among the human settlers. It could easily been a story of frontiersmen in the early 1800’s.

In fact, the observation was made that the book could be an allegory of westward expansion, a claim somewhat anticlimactic given the subject matter, but salient nonetheless.

Some favorite moments in this collection of vignettes were the story about the last man left on Mars who seeks and pursues the last woman in another city, how he travels, finds her, discovers she is fat and intolerably annoying, and chooses rather to be alone; paranoid ex-soldier who kills several aliens before they can explain to him that they are giving him their land; the Edgar Allen Poe redux in which the steward of a mansion gruesomely kills the government bureaucrats coming to confiscate his property.

We observed the change in attitudes between Bradbury’s day and ours, when human settlers on Mars returned to Earth en masse to fight when word of nuclear war reaches them. We decided that we are much more cynical and unpatriotic, and would not return.

Finally, we concluded that the book is not about realistically exploring the human soul or presenting a plausible technological enterprise. It is more about mood and quirk factor, and light commentary on the foibles of silly humans bumbling about a new place. It is about a fun read with poignant observations and stimulating the imagination. It is about all the enjoyable things that literature can be about (humor, imagination, human experience, human nature, possibilities, ideas) without sermonizing.

The book got good reviews all around as being an enjoyable read.